Too Free – No Fun

Today is Thursday, the day before dance trio Too Free’s debut full length album Love in High Demand drops via Sister Polygon Records. And two days before Saturday night’s album release party at U Street Music Hall, embedded inside the REV909 DJ night dedicated to French Touch and Indie Dance from the early 00s. Now’s the time to watch the band’s second music video for the single “No Fun” and revel in the joyous dance moves from singer Awad Bilal. Pretty fun after all. 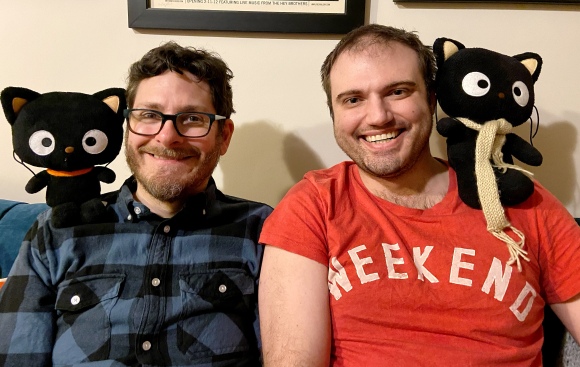 Continuing the journey from basement punk shows to glam dancefloor vibes, the members of now-defunct Priests continue to release music under their label Sister Polygon Records. Their newest act is Too Free, a trio comprised of Awad Bilal (Big Freedia), Carson Cox (Merchandise), and Don Godwin (Callers). Their debut single “ATM” is a warbly, off-kilter mid-tempo soul groove worthy of a 12″ single filled with remixes. Cox’s music video for the tune provides distinctive visuals for the song’s sparse elements. Grab the clear vinyl pre-order of Love in High Demand now before the album drops on February 21st.

Priests started musical life in the hardcore punk tradition of many of DC’s most well-known cultural exports. But over the years the band, and their captivating sound, have matured and moved away somewhat from those well-known tropes, such that their newest album The Seduction of Kansas is a surprising genre shift. They self-describe simply as a “rock band”, and for the album’s third single “Jesus’ Son”, Priests present a live performance video evoking well-known bands like the Smiths, the Stone Roses, and Nine Inch Nails. The latter might resonate most, as co-directors David Ashton (manning the camera) and singer Katie Alice Greer lovingly homage NIN’s single “March of the Pigs” from 1994’s The Downward Spiral. There are still some tix left for Saturday night‘s late show at the 9:30 Club with openers Mock Identity, so get right on that.

Tony and Paul discuss Black Mirror, choose your own adventure books, and of course all the hot new #DCmusic.

Priests – The Seduction of Kansas

Wow, this is not the Priests we remember from such post-punk bangers as “Doctor” and “And Breeding” from their epic 2014 EP Bodies and Control and Money and Power. Great bands are capable of startling evolution, and Priests, now a trio with the departure of Taylor Mulitz to play full time in Flasher, enlisted high profile producer John Congleton to help craft their second full length album The Seduction of Kansas with a new sound. Its title track is the debut single, a sexy dance punk number that still retains singer Katie Alice Greer’s acerbic wit in the lyrics. She also directed this music video with cinematographer Drew Hagelin, well-known on this site for helming vids from Pearie Sol and Bat Fangs. “The Seduction of Kansas” is truly gorgeous and quintessentially Lynch-ian with strange choreography and creepy hotel location, not to mention drummer Daniele Daniele’s resemblance to Sherilyn Fenn’s iconic character Audrey Horne. Keep your eyes peeled to grab tickets for Priests’s big hometown show at the 9:30 Club on Saturday June 15th.

Pearie Sol – Love Is For The Loving

Perry Fustero plays in the Sister Polygon oddball wing of DC punk music, both in the bands Gauche and Teen Liver and helming his solo project Pearie Sol (geocities lol). In sharp contrast to Sol’s dolled-up debut music video “Alley” from 2016, “Love Is For The Loving”, also directed by Drew Hagelin, is somber in black and white with mournful lyrics and alienating storyline. Grab Sol’s self-titled EP on Bandcamp and stay tuned for Gauche’s new music video coming next week.

Paul laments the closing of his college radio station, while Tony gets shaken down by Facebook.

Hand Grenade Job sounds like a young, cheeky punk band you’d see at a DIY basement show, and the duo of Beck Levy and Erin McCarley do draw some inspiration from that scene. But their minimalist sound, which they dub “post-Americana”, is decidedly more mellow and thoughtful. Pre-orders of their new album Devotionals, coming out on cassette via Sister Polygon Records, went up on their Bandcamp page today, as did the second music video from it. “New Year”, directed by Levy, is a sped-up meditation on raising children and making art in the face of an uncertain future. Being a mom sometimes means you’ve got marker all over your face. Their album release show is Thursday February 23rd at the Black Cat with Pissed Jeans.