Bowie MD’s Fernando Moore has been rapping in the DC scene since 2008, first as Nike Nando and then, after he ate a weird mushroom at one point, Super Nike Nando. His musical output is spread out over mixtapes, features and freestyles on SoundCloud, but he’s putting a big push behind his upcoming release #NeverSayDie. Nando collaborated with local clothing line LivLuvCulture on a special preorder deal for the new EP that drops exclusively on Audiomack on Friday. Check out this teaser video for Super Fuego, directed by Matt Sugawara.

One of DC’s most prominent female rappers RAtheMC is back on the scene with a new music video. Showcasing her love for her mother with a casual stroll around the National Harbor, “F.A.M.M.” features RA rapping about the most important things in her life, naturally Family and My Money. RA appears next with Thee H Collective supporting fellow DMV rapper Vito Brown at the Fillmore Silver Spring on Friday November 6th.

Everyone is surely losing their minds over the December release of the new Star Wars flick, but did you know that Daniel Craig’s fourth turn as James Bond, the Sam Mendes directed Spectre, comes out in just a couple of weeks? DC pop-punks The Max Levine Ensemble capture some of that superspy hype in “Sun’s Early Rays”, the first single from their new album Backlash, Baby, their first since 2008. Starring Katie Alice Greer from Priests and Sharad Satsangi from Ilsa, this video looks a whole lot slicker than their self-proclaimed “snacks and arts and crafts budget” should suggest. If you’ve enjoyed their summer-long pre-release album “stream” on the Black Cat’s jukebox, you’d better pre-order the vinyl release now while you can, or wait for the record release show on Sunday November 22nd at the Black Cat backstage with Sundials and Maneuvers. 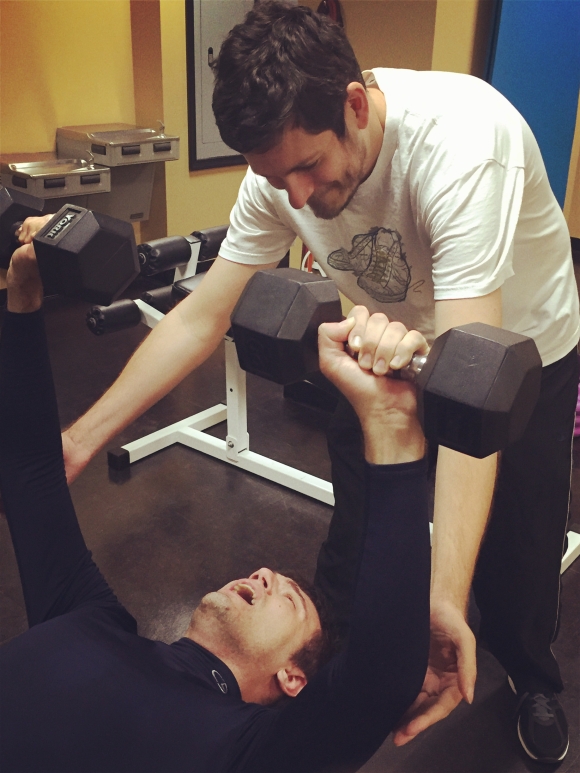 Paul & Tony interrupt their hardcore gym training routine, buffing up for the fall season, to bring you fierce workout jams from our favorite new DC releases!

We all know the adage of DC being a transient city. Bands, like the political and world-saving folks that come here, often leave eventually for greener or cheaper pastures. The energy of relatively young bands filling basements and posting free Bandcamp downloads is exciting, but the coexistence of that with grizzled vets putting out amazing new material is what makes DC a great music town right now. Along the lines of Dischord alum Chad Clark’s transcendent return of Beauty Pill earlier this year, now his former bandmate Ryan Nelson is poised to release the first Soccer Team album in a decade. Ryan and musical partner Melissa Quinley brought in drummer Dennis Kane and guitarist Jason Hutto to fill out the band for Real Lessons In Cynicism, out on Dischord October 27th. Don’t miss them this Sunday night at the always interesting Comet Ping Pong playing in between Polyon and Eternal Summers, but first watch this new music video for “Best Employed New Beau”.

Sometimes, the way to success for soulful hip-hop beatsmiths is to band together. After Columbia Nights completed the debut EP Dawn | Dusk (pro tip: grab it & tip the artist on NoiseTrade), the duo of Hayling Price and John E Daise invited producer Jason “BrotherSpanky” Edwards to help perfect their sound. As is often the case, the end result is well worth the wait as Columbia Nights takes their smooth downtempo “soultronic” to the masses with In All Things, their debut full length album out now on Philly’s Record Breakin label. Get acquainted with their style in this music video for Glide, featuring DC based vocalist and violinist Vaughan Octavia.

Teen Mom – When You Go (Waltz)

For years slacker-tinged indie rock band Teen Mom have graced stages all over DC, from Fort Reno to the Howard Theatre and many basements and DIY spaces between. It’s been two years since their EP Gilly filled our ears, but today the trio of Chris Kelly, Sean Dalby and Tom MacWright released their first full length album Groovy. Every good album release needs a music video, so Teen Mom gives us these visuals for the waltzable, dreamy single “When You Go”. Like their previous single “I Wanna Go Out”, one of the best DC videos of 2012, “When You Go” repurposes old footage, this time a bizarre 60s film featuring people dressed as monkeys riding bikes. Admittedly it gets a bit slow in the middle, but the end is worth sticking around for. Teen Mom plays live next on Friday October 23rd at WMUC in College Park with Expert Alterations and Slumberland Records’s Mercury Girls.

It’s finally Friday and we’ve got a beautiful fall weekend ahead. What’s on your agenda? Riding BMX bikes with the devil? That’s what artist Eva Moolchan is all about in this new video for “X.T.Y.”, a sinister post-punk groover by her musical moniker Sneaks pulled from both last year’s self-titled cassette release on Sister Polygon Records and this year’s expanded version Gymnastics on Parisian label Danger Records. The vintage 90s VHS style is a signature of director Ryan Florig and suits both the song and the devilish bike tricks.

Fans of singer-songwriter Rachel Levitin have endured a lengthy wait for her debut EP Nearly Broken, but the wait is finally over! Produced by Dave Mallen of Arlington’s Innovation Station Music, the 5 song EP is out today in iTunes and marks a big achievement for Levitin. The title track, and today’s DC music video, “Nearly Broken” was inspired by the life-saving heart transplant Levitin’s father received in 1999. After his passing some time later, Levitin channeled her emotions to songwriting, and the songs on Nearly Broken show a remarkable quality of honesty and depth.