Alex Vans – Somebody To Lose video

DC, after about 22 months and exactly 399 videos, it’s time for me to take a little vacation from HTS to recharge my batteries. But I couldn’t leave before posting the 400th DC music video of the day! Luckily my good friend Alex Vans came through for us with a brand new single “Somebody To Lose”, and a fun video peek into the music recording process at Bias Studios in DC. It’s also well-timed because Alex Vans & The Hide Away headline Iota in Clarendon tonight with a Megaband of friends including Margot MacDonald, Will Rast, Ken Wenzel and who knows how many more amazing musicians. As if THAT wasn’t enough, prog-rock band Kid Architect gives their fans one final show before moving on to other projects. This extravaganza is not to be missed! Unless of course you’re going on vacation, like I am. Sorry gents! I’m back on October 13th with more DC music videos, podcasts, show picks and more to spread the love of DC music to everyone. Peace.

Tagged Alex Vans & The Hide Away
Leave a comment
video

PG rapper Sean Born collaborated with Dunc of DTMD on his latest EP Organic for Kev Brown’s Low Budget crew. The debut single Work It Out features verses from Kaimbr and Hassan Mackey and a music video featuring great 1970s movie footage. This should inspire some of you to hit up Netflix with the keyword “blaxploitation” this weekend.

NOVA rock band Melodime is back on the scene after a couple of quiet years with a new single Halo and upcoming full length album Where The Sinners & Saints Collide out on October 15th. The album is a product of their fundraising campaign Make An Album, Change A Life, which sees 100% of the profits from album sales donated to a non-profit foundation they started called Now I Play Along Too, providing musical instruments and education for orphans, victims of disasters, and underprivileged kids locally and around the world. Vocalist Bradley Rhodes and brothers Sammy Duis (piano, bass) and Tyler Duis (drums) wrote the song Halo on a camping trip in northern Pennsylvania, and the band returned to the woods (probably not the same woods, of course) to shoot this video. Mark your calendars for their next show at The State Theatre in Falls Church on Friday November 1st. 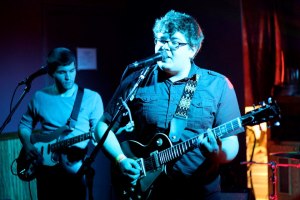 Who: These Future Saints w/ Alias Punch and The Dead Women
Where: The Velvet Lounge
When: Friday, September 27
Song You Must Hear Today: “Separation”

These Future Saints are a band that connect with my power pop roots, the clean-cut stuff I gobbled up in high school from acts such as Sloan and Ash. Since then, my tastes have generally moved towards the brasher end of the rock spectrum, but that’s not to say I steer clear of groups like these. Rather, I liken this stuff to lemonade: Something sweet and refreshing that makes for an excellent palette cleanser when you might otherwise be all punked out, though folks might have a higher or lower tolerance depending on the level of sweetness involved.

Earlier this month, we featured These Future Saints’ “Black Jack” via our Fresh Tracks column in the lead up to their very fun EP release show at IOTA.  Said EP Ellerslie Ave represents a quality debut release that manages to come off as both breezy and streamlined. “Separation” (which you can stream above) is hands down the most exciting of the Ellerslie’s five songs: A saccharine-loaded ICBM of a guitar line roars over propulsive dance rock drums, which are subsequently swapped out for a verse of singer Andrew Gaddy’s clear-throated vocals and a skippy guitar arpeggio. Likewise, the song’s balmy chord changes and taut rhythms bespeak a band with noteworthy control of their craft.

“Come Around” and “Take Care” both feature a little more of an easy-going, classic rock vibe, with the former sporting a verse that’s melodically similar to Thunderclap Newman’s oft-covered flower-power anthem, “Something in the Air”. “Take Care” on the other hand, with its boom-chop rhythm and winding, picked electric guitars sounds like a more modern, well-mannered take on Mungo Jerry’s timelessly playful “In the Summertime”.

For some bonus TFS content, check out this video DC music enthusiast (and artist!) Kate Moran took of the band at IOTA in March, performing “Blackjack”, which, by singer Andrew Gaddy’s own account is about “making out in the back of a cab”. (GASP!) Also, that’s The WeatherVanes’ Jackson Edwards helping out on bass!

In sum, These Future Saints are a newer band with sunshine in the songwriting, even nimbler arrangements, and a vocalist who knows how to kill ’em. The band performs this Friday at The Velvet Lounge with The Dead Women, whose live show is a sure bet, and Alias Punch, who do a spooky brand of surf punk.

Drop Electric – Waking Up To The Fire video

Post-rockers Drop Electric continue the buildup to the release of their second full length album Waking Up To The Fire on Lefse Records that drops October 22nd. Today they released another powerful music video for the title track of the album. I don’t like to talk much about the content of music videos in these intro posts, since you’re about to watch the thing for yourself, but I will say that I like the way this video illustrates the dichotomy of working and living for fun and art in DC. Also there’s a brief but awesome escalator shot to look out for. As for the music, Drop Electric’s sound fits so well in the music video format, but I’m really looking forward to hearing all these songs as a cohesive album. Don’t miss Drop Electric playing this Friday night September 27th at LivingSocial’s 918 F Street venue.

On this episode Paul & Tony discuss bands playing too many shows, Tony learns about the cassingle, and Paul reveals an embarrassing fact. Also, 10 new DC songs!﻿

Subscribe to the Hometown Sounds podcast (& rate it!) in the iTunes Store or your favorite podcasting app!

We here at Hometown Sounds are suckers for songs about the DC region. PG County rapper Lyriciss just released a new music video for Maryland, his tribute to the Free State and specifically his home county, featuring fellow native Pro’Verb. Out-of-towners can use this song to learn the correct pronunciation of Maryland. Pre-order Lyriciss’s new album The Balance on Inner Loop Records before it drops on October 29th.

We Were Pirates’ Mike Boggs isn’t the only DC musician getting into the business of scoring films. Experimental cellist Wytold composed original music for the documentary Blood Brother, the story of Rocky Braat’s search for a family that leads him to an AIDS hostel in India. The award-winning film finally has a screening date in DC, on Wednesday October 9th at the Landmark E Street Cinema, including a live performance by Wytold. You can do your part by buying a $15 ticket in advance, as the event needs to pre-sell a number of tickets for the event to proceed. Today’s DC music video is a live looping performance by Wytold and Q&A with director Steve Hoover, shot earlier this year at the Sundance Film Festival.

Many years ago, before I came up with this idea to DJ DC music, I DJed weddings for my music fix. It was stressful and a lot of work, but I had some really fun times making big crowds dance to cheesy pop music. But the first song on every Do Not Play list was always Marcia Griffiths’ 1989 song Electric Boogie, what we all know as The Electric Slide. Seems like an odd choice for a cover by Lowercase Letters, but their injection of soul and fun makes for an entertaining cover in House Studio DC‘s $5 Music Video series.

DC is home to a lot of different music scenes, collectives of like-minded musicians working together to build audiences and play gigs. One of the longest running and most underground organizations is Sonic Circuits, the umbrella label for really experimental music locally. In addition to hosting numerous shows throughout the year, primarily at Pyramid Atlantic in Silver Spring, they put on the Sonic Circuits Festival of Experimental Music which this year takes over the Atlas Performing Arts Center and other venues from October 1st to 6th. Today’s video comes from Salarymen, the duo of Amptext‘s Gary Rouzer and Sonic Circuits director + curator Jeff Surak, who also runs the “intelligent noise music” netlabel zeromoon. This stuff will seriously stretch the boundaries of what people call music. Look for these noisemakers in a traffic circle near you soon.