Kid Congo Powers, legendary musician with The Gun Club, The Cramps and Nick Cave & The Bad Seeds, has a brand new music video timed for the spookiest day of the year. Haunted Head, the title track from Congo’s most recent full length album, delivers his classic garage style of fuzzed out guitars and droll vocal delivery. Be on the lookout for cameos of local burlesque stars, including Tilted Torch’s Short Staxx and Lucrezia Blozia of Hope Operas. Happy Halloween!

The Morrison Brothers Band – Gimme All The Love video

Yesterday The Morrison Brothers Band unleashed another music video from their pop country debut album State of the Union. Looks like these boys put on a great live show! See for yourself this Friday night at the State Theater in Falls Church as they open for local headliners Melodime.

Subscribe to the Hometown Sounds podcast (& rate it!) in the iTunes Store or your favorite podcasting app!

Moving on from their earlier, folkier material, Typefighter is anxious to release their new powerful, loud rock sound into the wild. The new album The End of Everything comes out next year, but the debut single from it Much gets the music video treatment today. It’s a gorgeous and fun music video, perfectly timed for Halloween week, and reminds us that childhood isn’t all innocence and sweetness. Also, Typefighter have one of the best band names in DC. Nice job. 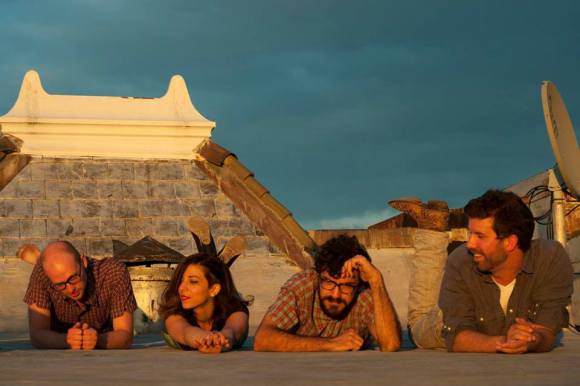 It’s time for another round of Fresh Tracks!, where Hometown Sounds brings you the very latest in noteworthy music emerging from the District. “Gone”, the first single from dream rock quartet Humble Fire just went live on the group’s Bandcamp page this afternoon, so I’d be hard pressed to find anything much fresher to close out the work week.

Following a 10 second straight ahead sprint of distorted guitar chords and snare drum rolls, the rhythm section busts down the door with an adrenaline-prodding stomp before ducking back down to make way for vocalist Nefra Faltas’ syncopated warbles. Guitarist Dave Epley’s clean, heavily delayed guitar coils throughout the song’s verses before returning to the hurried dash of the intro riff.

“Gone” embodies a noteworthy release for a couple of reasons. First, the track showcases the band’s ability to establish a strong groove you might even characterize as danceable (an uncommon feat for a rock band). Second, this represents the first publicly available studio recording of Humble Fire, which is interesting given that the band has been performing live for some time. However, their previous lack of recordings actually contributed to their sense of mystery and emphasized the importance of catching the band’s blissed out live show, which I’ve had the pleasure of taking in on several occasions.

Humble Fire performs tomorrow (10/26) at Knoxville, Tennessee’s Preservation Pub, but are currently in between performance dates in the DC area. So enjoy this while they’re…”gone”.

Kingpen Slim – Hold You Down video

October is Domestic Violence Awareness Month and rapper Kingpen Slim dedicates his latest video to this important issue affecting 1 in 4 women (and a significant number of men too). Hold You Down featuring Marcus Canty serves as a PSA and implores anyone affected by this trauma “Don’t Be Afraid To Leave” with help from www.thehotline.org. Hold You Down comes from Slim’s newest mixtape The Deep End coming later this fall.

Leading up to their first album release in 12 years and a pair of gigs at the 9:30 club last weekend, DC legends The Dismemberment Plan premiered a music video for Uncanny Valley‘s debut single Waiting on MTV last week (they still play videos?). The bar referenced in the song is The Ugly Mug, frequented by students at Gallaudet University for the deaf and hard of hearing, leading singer Travis Morrison to include American Sign Language interpreters in the goofy video. The D-Plan took that idea all the way into their full live show, involving a rotating pair of ASL interpreters attempting (and mostly succeeding) in signing Morrison’s rapid-fire talk-sing delivery.

Recently Singer-songwriter Aaron Tinjum actually relocated to DC from Austin Texas, swimming against the tide of those talented musicians who make their mark on DC and move away. You’ll hear the Texas influence in his newest music video for American Road, a song about dysfunction in America that’s right at home in this town. Tonight Aaron joins Justin Trawick’s We Are The 9 singer-songwriter showcase at Iota alongside Dan Fisk, Louisa Hall and 5 other fine musicians. And while we’re talking about the hardworking Mr. Trawick, grab the latest episode of his podcast The Circus Life released today, featuring The Future of Music Coalition and our buds at Listen Local First!

Dot Dash – A Light in the Distance video

If you are into post-punk, you probably have all three excellent albums by Dot Dash on the Canadian label The Beautiful Music. If you aren’t quite sure what this post-punk sound is all about, A Light in the Distance (FREE download!) from Dot Dash’s latest album Half-Remembered Dream is a great place to start. Members of Dot Dash come from well-remembered bands Julie Ocean, The Saturday People on the Slumberland label, Swervedriver and Youth Brigade from Dischord. Check them out tonight at DC9 opening for hot newcomers Junior Prom.