Is And Of The – Assassins Hid in Our Loops video

Mush Records experimental musician Droo Bandos, under the stage name Is And Of The, has a new video from his latest FREE full length album Know Not. The evocatively named Assassins Hid in Our Loops has the trippy visuals you’d expect from this music, but also includes a bit of narrative from director James DuBourdieu. Keep a browser tab open on Is And Of The’s Facebook page for solo show announcements for the coming week.

Tagged Is And Of The
Leave a comment
video

Deathfix rocked the Black Cat Backstage last night, and I hope you all went and had a blast while I drove home from Virginia Beach for 6 hours. In case you don’t yet know Deathfix, they’re the newest rock band on the Dischord label, a supergroup of Brendan Canty (Fugazi), Rich Morel (Blowoff with Bob Mould), Devin Ocampo (Faraquet) and Mark Cisneros (Medications). Here’s a fun video for their debut single Better Than Bad, from their self-titled debut album, featuring lots of great biking footage shot by Mat Hoffman, whose film “Birth of Big Air” was scored by Canty.

This Weekend in Live DC Music

There are so many great shows this weekend to tell you about, and all are well worth your money and time!

Wheelie – I Been Lovin video

Saturday night the Rock & Roll Hotel hosts the hometown stop of troubador Justin Jones‘s month long tour. Kicking off the show is Rachel Kate and new synthrock (is that a genre?) band Wheelie. These guys are creating an original sound with soulful vocals, snazzy keys, handclaps and an offbeat sense of style. Definitely worth showing up early to catch their live set!

Borracho – All In Play video

DC’s musicians and live music fans owe an enthusiastic high five to Catherine Lewis, freelance music journalist and proprietor of the excellent concert listing aggregator Showlist DC. I recently met Catherine and her boyfriend Chris, DCHeavyMetal.com blogger, at a show at The Pinch, and Catherine politely and validly pointed out the lack of metal at Hometown Sounds. I admit, I am not yet a devoted metalhead like many at the packed house to see Warchild that night, but Hometown Sounds is devoted to all genres of DC music, and to that end: MOAR METAL! First stop is hugely popular stoner metal band Borracho. Today they release a brand new 7″ Mob Gathering through Spain’s Ghost Highway Recordings and Germany’s No Balls Records, packaging up some unused demos from their 2009 album Splitting Sky. It’s limited to 200 black copies and 100 marbled orange pressings (mmmmmm), so grab yours before they vanish. Today’s music video for All In Play, from Splitting Sky, is so huge in its scope that it really brings out the lameness of my laptop speakers. Listen with big chunky headphones, or better yet see them live at the Velvet Lounge on Thursday March 28th with Been Obscene from Austria and their buddies SuperVoid from Pittsburgh. And look, Showlist DC is giving away two pairs of tickets to the show! It all comes together.

These United States – Nobody Can Tell video

Many people in this town fondly remember Jesse Elliott’s gang of rock troubadors These United States. As frontman and lyricist, Jesse’s performances were often transcendent, attempting to divide your attention between poetry of his words and the energy of his delivery. Nomadic bands like These United States never stay rooted down long, and after scattering to various locations around the country, they recently decided to part ways. According to TUS’s Facebook feed, Jesse has formed a new band called Ark Life that recently played its debut show out in Denver. I’m very much looking forward to their inevitable swing through DC. Here’s the last TUS video I had saved up from their time here, Nobody Can Tell from their 2010 album What Lasts.

Late Friday, before their SXSW send-off show at the Rock & Roll Hotel, Shark Week debuted their first music video for Baby Maybe, a song coming out on 7″ in April. Despite only having a short 3 song EP available, Shark Week has exploded in popularity in DC through their rugged and captivating live shows. Playing SXSW and the Sweetlife Festival in May could send Shark Week to the big leagues, and this beautiful video shot in Puerto Rico is a big step in that direction. Check out The Vinyl District for a fun interview with Shark Week about the video and the direction of the band.

Song You Must Hear Today (but should have heard two years ago): Presto Bando – “Whole Body Blues”

When I learned in late December that Presto Bando was going to be breaking up following a final performance at Velvet Lounge on January 4th, 2013, I was so sad.  Really, you have no idea.  Over the course of almost a year, I saw them play 12 times, which must be the largest number of shows I’ve ever attended for any individual band. (This isn’t so remarkable.  I actually went to grad school with a girl who’s seen Pearl Jam 50+ times.)

What kept me coming back?  Sheer entertainment value.  Corey Shinko’s goofy, yet oddly virtuosic bass lines were the musical equivalent of an enormous, off-leash cartoon dog, and my goodness, could vocalist Brandon Ables squeal and hoot with the intensity of an unhinged Southern preacher.  One person I took to a Presto Bando show likened the experience to “some kind of future Dylan”, and that’s really not a bad summation, as Able’s songwriting is Southern rock served via manic punk energy and, above all, hefty quantities of raw id.

So, I was absolutely ecstatic when I learned a few of weeks ago that Presto Bando main man Brandon “Don” Ables would be returning to the stage for a show this Thursday at Velvet Lounge, opening up for two other DC acts.  The first of these bands is Brenda, who play humorous goofball pop about topics such as manatees and deciding to become bisexual.  Headlining the night is North of Canada, whose more straight laced (though still excellent) guitar rock promises to bring some traces of sanity to what’s otherwise destined to be an evening of wacky musical hijinks and madcap shenanigans.

I have it on good authority from Brandon himself that he’s got a considerable amount of new material he’s eager to try out, but that he’ll be playing “maybe two or three” old Presto Bando numbers, you know, for the kids.

I’ll be there, grinning from ear to ear, thrilled that I get to see one of my favorite personalities from the DC scene throw down again. 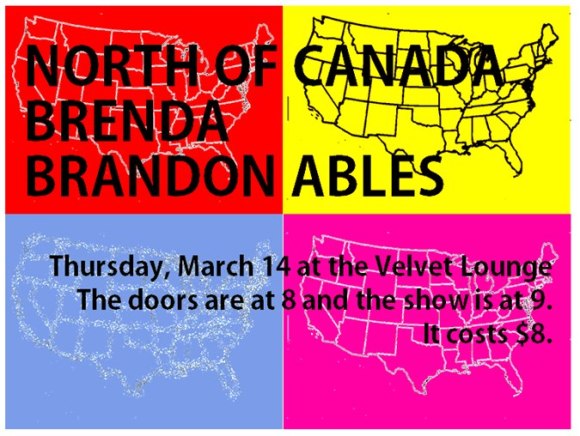 Or listen on SoundCloud:

Subscribe to the Hometown Sounds podcast in the iTunes Store