Back From The Dead: An Interview with Presto Bando

Without a doubt, the DC music scene became several decibels quieter in the months following Presto Bando’s final performance on January 4th of last year. Their Southern-fried punk rock was hard to ignore, and singer Brandon Ables’ vocals encroached on the terrain of a deranged “future Dylan”. The band’s live shows were always a highly energized spectacle, and set a high watermark for performance art few other bands were able to match. During the band’s final set, Ables (vocals, guitar) cheerily described the “hatred” he and his bandmates had developed for one another to an uncomfortable audience, urging them to take their CDs, “because we’re just going to throw them in the trash anyway.”

Following their “break up”, Corey Shinko (bass, vocals) and Ables told me of plans to do a “posthumous” release, and this was a topic I pestered them about incessantly throughout the spring and early summer of 2013. Finally, there was an oddly timed July 4th “Pre-Release” Party thrown by Emanuel Pires, who Ables and Shinko claimed to be recording with at his home studio in Annandale, Virginia. Several more months passed, and I admittedly began to wonder if the project had been scrapped before I received a text from Shinko in November asking if I’d like to meet with him and Ables to discuss the now-complete 11 song record, entitled Witchtopher Columbus.

Read our full interview with Presto Bando after the jump, where they discuss the reasons behind their “break up”, the recording of Witchtopher Columbus, and Ables experiences working as an ice cream man.

END_OF_DOCUMENT_TOKEN_TO_BE_REPLACED 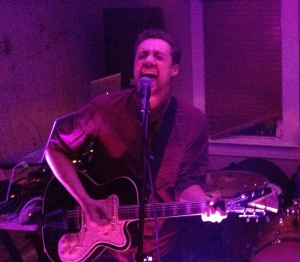 Song You Must Hear Today (but should have heard two years ago): Presto Bando – “Whole Body Blues”

When I learned in late December that Presto Bando was going to be breaking up following a final performance at Velvet Lounge on January 4th, 2013, I was so sad.  Really, you have no idea.  Over the course of almost a year, I saw them play 12 times, which must be the largest number of shows I’ve ever attended for any individual band. (This isn’t so remarkable.  I actually went to grad school with a girl who’s seen Pearl Jam 50+ times.)

What kept me coming back?  Sheer entertainment value.  Corey Shinko’s goofy, yet oddly virtuosic bass lines were the musical equivalent of an enormous, off-leash cartoon dog, and my goodness, could vocalist Brandon Ables squeal and hoot with the intensity of an unhinged Southern preacher.  One person I took to a Presto Bando show likened the experience to “some kind of future Dylan”, and that’s really not a bad summation, as Able’s songwriting is Southern rock served via manic punk energy and, above all, hefty quantities of raw id.

So, I was absolutely ecstatic when I learned a few of weeks ago that Presto Bando main man Brandon “Don” Ables would be returning to the stage for a show this Thursday at Velvet Lounge, opening up for two other DC acts.  The first of these bands is Brenda, who play humorous goofball pop about topics such as manatees and deciding to become bisexual.  Headlining the night is North of Canada, whose more straight laced (though still excellent) guitar rock promises to bring some traces of sanity to what’s otherwise destined to be an evening of wacky musical hijinks and madcap shenanigans.

I have it on good authority from Brandon himself that he’s got a considerable amount of new material he’s eager to try out, but that he’ll be playing “maybe two or three” old Presto Bando numbers, you know, for the kids.

I’ll be there, grinning from ear to ear, thrilled that I get to see one of my favorite personalities from the DC scene throw down again.

Tonight’s show at the underground house venue Paperhaus has a fantastic mostly-local lineup: Presto Bando, Les Rhinoceros, Imperial China, and Tampa Florida’s Alexander and the Grapes. Today we feature a video from DC Setlist‘s Holiday Video 2011, Presto Bando covering the song “Walking In The Air” by Howard Blake from the 1982 animated short film The Snowman. Cute stuff. Head over to their Bandcamp page to download two free EPs before coming to the show tonight!