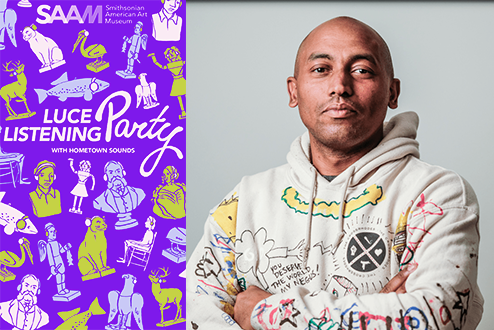 The Luce Listening Party, our collaboration with the Luce Foundation Center in the Smithsonian American Art Museum, continues with special guest Wes Felton!

Are Krispy Kreme flavored Jelly Bellys any good? How many cameras does Paul’s new phone have? Is a hot dog a sandwich? Find out!

Tracklisting:
Middle Kid – Queen of Rockledge [Queen of Rockledge]
Silent Old Mtns. – People [single]
The Make-Up – I Am Penatgon [Save Yourself]
Suzy Callahan – Karen (Country Version) [single]
Wes Felton – Suicide of the Ego [The Year of Return]
Jahnel Daliya – Gold [Into the Night]

The CrossRhodes – Look At You

This sexy music video came out last month for Valentine’s Day, but couldn’t we could all use a little romantic boost on a Wednesday? The CrossRhodes, the sublime pairing of smooth singer Raheem DeVaughn and outspoken rapper Wes Felton, often tackle pressing social issues in their songs, but “Look At You”, from their 2017 album Footprints On The Moon, showcases amorous desires for the fairer sex on a night out at Marvin. Look out for some subtle cameos from DC’s rap scene lounging at the party.

What did you do at summer camp this year? If you were lucky enough to attend Hands On The Future, a youth program that trains and prepares teens and young adults for the entertainment industry, then you got to hang with and learn from DC rapper Wes Felton, well known as one half of The CrossRhodes with singer Raheem DeVaughn. Felton’s upcoming mixtape King In The Wilderness with producer Derek “Product” Wilson drops soon through Fresh Kids Music Group, and in the meantime Felton released this video for the advance single “Stranger Fruit”, described as “an outcry to our ancestors and young people who have died at the hands of society’s traps and gimmick”. The video was shot at the summer camp, comprising half rhymes and singing and half inspirational tribute to nature and bonfires.

Freddie Gray. Korryn Gaines. Sandra Bland. Eric Garner. The now-familiar names continue ricocheting throughout “Praying Prayers”, the new music video from The CrossRhodes from their 2017 album Footprints on the Moon. The powerhouse duo of Wes Felton and Raheem Devaughn remind us that “When the video was shot, 667 people were reportedly murdered by police officers since January 2016” in the intro to the Xaivia Inniss video providing a taste of dangerous life on the streets. With so many huge problems besetting Americans of all races, creeds and orientations, we crave art to show us what’s important and the consequences of inaction, even if solutions remain elusive. Check out their recent appearance at Bob Boilen’s Tiny Desk for a delicious mix of concert, spiritual service and motivational rally.

Producer and rapper Wes Felton and three time Grammy nominated crooner Raheem Devaughn have prolific careers on their own, but their collaboration as The CrossRhodes stands out to fans of DC hip-hop from the golden era of the mid-aughts. The duo has reunited with the mission to use their conscious messages and prodigious talent to further the fraught conversation about race in America. Footprints On The Moon is their first album in many years, and its 2016 single “America”, released right before the election, recently got this powerful music video directed by Chris Scholar featuring poet Raquel Ra Brown. 2017 feels like many steps backward for communities of color in America, but songs like these give us hope for long overdue progress. Make some room in your busy December calendar for The 4th Annual Raheem DeVaughn & Friends Holiday Charity Concert at the Howard Theatre on Thursday December 21st.

Happy Birthday to DMV rapper, singer and producer Wes Felton! The promotion engine for Felton’s newest full-length album Imagine The Future continues with a new music video for Walked Away, shot in an abandoned building under construction with some amazing views of the city.

Wes Felton – Thy Will Be Done video

Prolific and soulful singer and rapper Wes Felton, also known as W. Ellington Felton, just released a new record called Imagine The Future on his Bandcamp page. All 12 tracks were produced by Kenny Allen at East Africa Studios in Addis Ababa, Ethiopia, and the full length album is another strong entry into Felton’s deep back catalog. The first video from the album, Thy Will Be Done, is a bit sexy and racy but still pretty SFW. Felton officially celebrates this new release Friday night at Art Under Pressure on Georgia Avenue with soundscapes provided by Munch.

Whether you know him as Wes Felton or the more formal W. Ellington Felton, you should definitely grab a free copy of this rapper & singer’s latest mixtape Spatial Intelligence featuring guest spots from Uptown XO, Javier Starks and more. His lastest video is Fences, produced by Goony Swillz. Nothing fancy or overproduced, just a nice taste of Felton’s laid-back, assured delivery.