We originally shared this over the weekend, but didn’t want the Monday crowd to miss out. Des Demonas singer Jacky released the unofficial music video for the anthemic protest single “The South Will Never Rise Again”, from their 2017 debut self-titled album, with this note:

This “unofficial” video for “The South Will Never Rise Again” is based on footage from what was going to be the video but has now recently been put together by our friend Jonathan Howard:
“For all my friends out protesting against injustice and the senseless killings of black people, be safe, take care of each other, fuck the police! posting this video without my bandmates permission. this is an old song off our first record, not posting it for cool points or to make any money from it. At a time when there’s counter protests by MAGA wankers and a president who may be trying to divide and conquer the nation just so he can have power here’s a song saying you can lynch us you can shoot us, you can harm us BUT we won’t take it in the chin. You are not going to win. FUCK YOU!
PS I Spoke to mum mums earlier today and she told me not to post this video until the protests are over, to avoid escalating and also as hope for reconciliation between the victims and the perpetrators…mothers eh?” 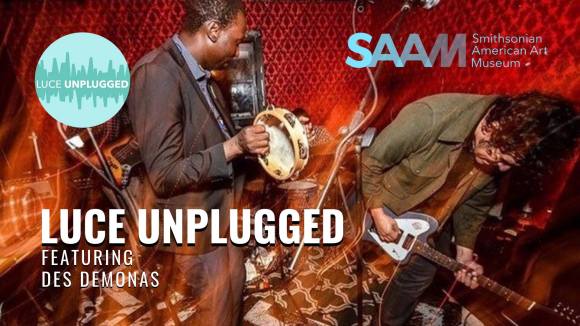 The band hails from Washington, DC, and have been denizens of the byways and highways of the city’s musical underground for years. Jacky Cougar Abok is the six-foot-five-inch tall Kenyan punk singer who has drummed with Thee Lolitas and Foul Swoops. Guitarist Mark Cisneros has bent strings with Kid Congo & The Pink Monkey Birds, Deathfix, and Medications, and has pounded the traps for The Make-Up and Benjy Ferree, the latter alongside organist Paul Vivari. Joe Halladay (Citygoats) on bass and Ryan Hicks (Suns Of Guns) on drums round out this squared circle of sight and sound.

A staff-led art talk about artwork chosen by the performing artists starts at 5:30 pm followed by a performance at 6 pm. As always, the show is free & all ages so RSVP here!

Paul finds DC music through a British writer’s email list, and Tony muses about FM radio DJs in the modern age. Also a special intro from The Caribbean’s Michael Kentoff!