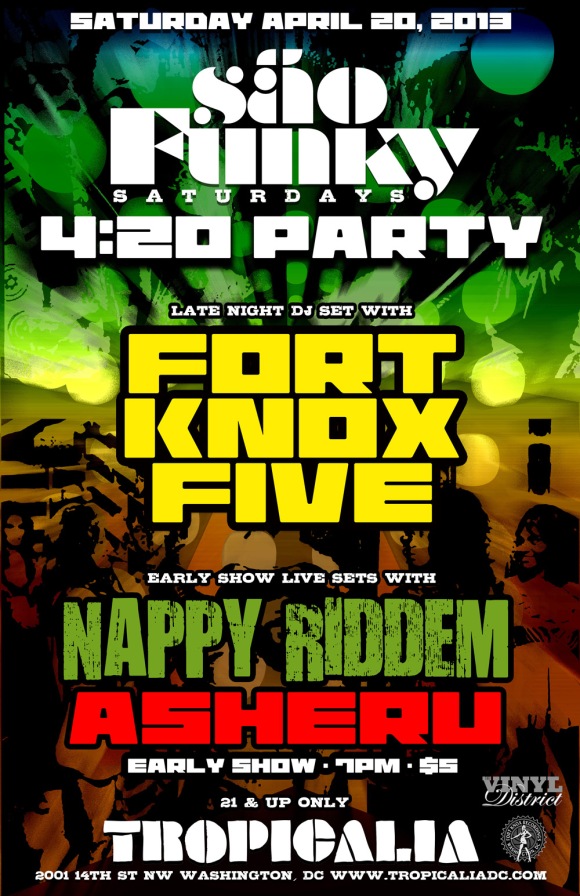 The fine folks at Fort Knox Recordings are taking over U Street hotspot Tropicalia Saturday night for the auspicious 4/20 celebration. In addition to the regular weekly Sao Funky DJ night by Fort Knox Five, Asheru and Nappy Riddem will provide the funk and hip-hop vibes to start off the evening early at 7 PM. The duo of Nappy Riddem, Mustafa Akbar and Rex Riddem, is well loved after their successful reggae and funk album One World Sovereignty. New material from Nappy Riddem is coming soon, including this track Rocksteady, performed earlier this year at Jammin’ Java.

Asheru is one of my favorite rappers in DC. His smooth delivery and deft lyrics always amaze. Most well known for the Boondocks theme song, the 4/20 show will feature a rare appearance by Ash’s full band The ELs. Here’s Ash collaborating with Nappy Riddem on the title track of their album.

This will be a fantastic night of music, and Tropicalia is the perfect spot to get down with the funk. The cover charge for the Nappy Riddem/Asheru show is $5, but we’ve got two guest list spots to give away to one lucky winner! Just leave your email address in the comments or like the post on Facebook, and you’re entered to win. The winner will be announced Friday afternoon, good luck!